“The miracles of Earth are the laws of Heaven.”  Johann Paul Richter

At the end of the last blog post, I left you wondering how the Egyptian magic in the Valley of the Kings became even more miraculous.  So here is the story.

In March 2005, I left the ministry I had founded in South Africa, Soul Home, and returned to Europe to work as an English teacher.  En route from Johannesburg to London, I spent two months in the city of Luxor on the East bank of the Nile, from where I could explore the ancient temples and tombs to my heart’s content as well as get started on my autobiography. (The Miss-Adventures of an Irreverent Reverend: a spirit-ed guide for rebels and renegades.  amazon.com/author/revstephanieclarke)

If you have ever travelled in Egypt, you will know that potty breaks are an issue.  Finding a loo when you need one is a challenge of note and when you do find one, it is often a smelly, less-than-sanitary hole in the ground. My best friend in Luxor, Ahmed, had a solution for me.  He managed a shop in the city centre close to the Nile and the Luxor Temple.  The back door of the shop opened onto a lovely shaded court yard with tables, couches and canopies where a vendor was selling coffee, tea and fruit juices.  This balmy peaceful area, cut off from the main drag and the noisy tourists, was actually the forecourt of The Luxor Hotel. 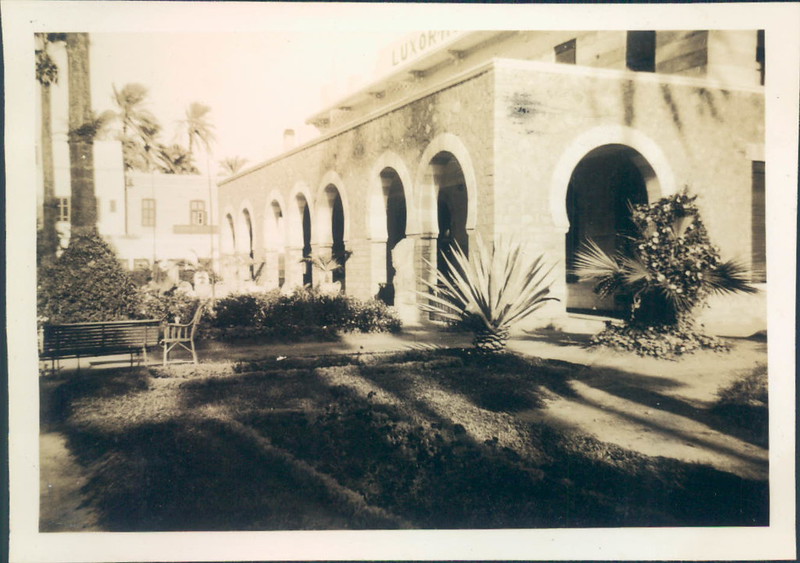 In fact, in the old photograph above,  you can almost see the doorway of Ahmed’s shop on the far left if it were not hidden by the trunk of a whacking great palm tree!

In the lobby of the Luxor Hotel there were semi-decent western loos.  It was rare to find loo paper AND soap AND towels on any given day, plus the loo floor was often wet, but still, this was a luxury and allowed me to drink my Egyptian mango juice or my freshly squeezed lemonade without fear of the consequences while I wrote my life-story on my laptop.

In the garden of the Luxor Hotel, Luxor 2005

Now, what is interesting about The Luxor Hotel is that it was chosen as the on-location film set for the 2005 production of “Tutankhamun,” the BBC 4-part series about the discovery of the young pharaoh’s tomb – the very same series that my mum has saved for me to watch in 2017 in S. Africa!

And what is even more interesting is that the on-location filming was happening during the very two months that I was staying in Luxor!  In fact, some of the film crew and actors were staying in the hotel.  The local Egyptian extras, who were playing the role of Howard Carter’s digging crew, would gather there in the courtyard every day to be taken across the Nile to the film set on the West Bank in the Valley of the Kings.

The lobby of the hotel had been transformed into an exotic 1920’s ex-pats’ club, complete with red velvet sofas, rubber plants and paintings of European nobility. So as I wandered into the hotel lobby to use the loo, I was transported into 1920’s colonial Egypt.

A few months later, after I had returned to London, I went to visit a friend of mine, Dave.  Dave watches a lot of TV and simply turns the volume down slightly when he has visitors.  While we sat and chatted, I noticed a familiar scene out of the corner of my eye:  “Tutankhamun,” the BBC series, was on TV!  And the reason it caught my eye was that the scene was taking place in the “ex-pats’ club” in The Luxor Hotel!

“Dave,” I said, excitedly, “Look! I used to go to the loo right there behind that rubber plant!”

Dave, a full-on Cockney with the gift of the gab and rarely stuck for words, was silent. He smiled at me like the wise old Sphinx. Was he awed by my glamorous life or trying to visualise me peeing behind the plant?

It remains both a mystery and a miss-story to this very day.