For many years, I have had the intention to meet a Holocaust survivor in person and listen to their testimony.  Tonight I attended the monthly speaker event at my mum’s retirement village.  The speaker was a diminutive Jewish woman, in height only but certainly not in soul.  Her name is Irene Klass and she is a survivor of the Holocaust.

Irene graced us with the moving story of how she was a young girl of 8 living in Lodz, Poland, when World War II broke out.  At first, Jews were forced to wear white armbands showing a blue Star of David. Later that was changed to the more well-known yellow star.  Her father did not look Jewish and he spoke fluent German.  He made the hard decision to leave his wife and daughter and pose as a Polish citizen in the hope of being able to help them all to escape from the Nazis.

When a convoy of German trucks came through the ghetto area to round up the Jews and take them to the death camps, Irene’s father spoke to one of the German guards and asked if his wife and daughter could go on the last truck. It was understood that the Jews on the last truck would be able to escape.  The German guard agreed and turned a blind eye when Irene and her mother jumped down from the truck and hid.

Irene’s dad got false identity papers drawn up for his daughter.  He came to get her 2 years after he had left the family.  There was a building on the edge of the ghetto that had a door on the Jewish side and another door on the Polish side.  Irene’s dad had to bribe the German guards to let her pass through that building and meet him on the Polish side.  Irene had to say goodbye to her mother, not knowing when or if she would ever see her again.  Her mother looked too Jewish and Irene’s father had to make a different plan to help his wife escape and then keep her hidden.  Irene was so happy to see her father after 2 years’ absence and naturally wanted to hug and kiss him but he told her sternly not to show any affection otherwise they would arouse suspicion.  She had to call him “Uncle” not “Dad”.

Irene’s dad took his daughter to a French woman he knew who was willing to take care of the orphans of the war and offered to pay her for Irene’s keep.  Posing as Irene’s uncle, he told the woman that Irene had lost both her parents in the bombing.  If the woman had known Irene was a Jew, she would probably not have taken her in as the Nazis  shot anyone who was caught hiding Jews.

By this time Irene was 10.  Her new foster mother naturally took her to the Catholic church every week to pray.  Irene had never been inside a church before but she learned quickly how to behave at the Mass.  Her father would visit her once every 2 or 3 weeks.  And then his visits stopped.  To this day, Irene does not know where or how he died but she believes his circumcised penis was discovered during a random Nazi inspection of Jewish suspects.

Before he died, Irene’s dad was able to help his wife escape from the ghetto via the sewer.  The Germans knew about this escape route and were often waiting at the mouth of the sewer outside the ghetto to shoot Jews who tried to escape. Irene’s mum had to walk through the sewage up to her neck but her escape was successful and her husband took her to a hiding place in the attic of a house in Warsaw.  Just like Anne Frank in Amsterdam, she had to keep quiet all day and only move around or use the toilet after dark.

The Nazis did not only round up Jews; they also put the local Polish people in camps where they were set to work for the Germans.  Irene and her foster mother were taken to a camp. They had not been there long when Irene’s aunt suddenly appeared at the gates of the camp.  She also did not look Jewish and had been able to pass as a Pole.  On this particular day, she showed up in a nurse’s uniform. She was not a nurse. In fact, she knew nothing about nursing but she convinced the guards that she had been sent to the camp to find the children with typhus and remove them from the camp before they infected the others.   The Germans bought the story and let her in.  She immediately went to Irene, took her to one side and rubbed white flour on her face to make her look sickly.  She told Irene to pretend that she was really faint and could hardly walk and Irene let herself be dragged out of the camp by her aunt and taken to a safe hiding place – a farm outside the city where her mother was waiting for her.

By this time, the Russians had begun to liberate Poland, except that they were violent and had a reputation for raping the women whom they were supposed to be liberating.  The Jewish women were still not safe.  They continued to hide, this time from the Russians, not the Germans, and managed to survive until the end of the war was declared.

After the war, Irene went to England and then to South Africa where she settled got married and had a family.  At the age of 87, she still works tirelessly as a volunteer at the Holocaust Museum in Johannesburg and regularly gives talks to a variety of audiences, including many school children, warning them of the horrors of prejudice. 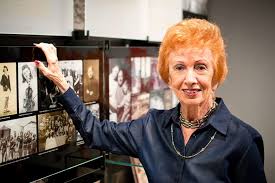 Listening to Irene was a moving experience and it was inspiring to hear about all the miracles that happened in concert with her will to survive.  Her life is a tribute to the strength of the human spirit.