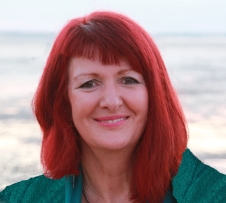 In last week’s blog post, I relayed to you how the morning unfolded at the Human Rights Summit, 2019. Now we come to the afternoon.

The beautiful Dr. Nothabo Ncube, originally from Zimbabwe, joined us from Toronto, Canada, to speak to the millennials.  Her speaking slot was supposed to be in the late morning, about one hour after she landed in Johannesburg from London, UK.  However, her flight was slightly delayed.  Spirit knew that, of course, and so the whole event ran “late” to accommodate these airline delays. 🙂 Nothabo inspired us all with her passionate speech about the importance of living our dreams.

Celebrity Comedian, Celeste Ntuli, was hilarious. She spoke so honestly about the challenges of being a 40-year old, overweight, professionally independent woman trying to meet a suitable male partner to date and eventually build a relationship with. With her blunt and down-to-earth humour, she spoke to everywoman’s longing to find a mate with the capacity for intimacy, romance and a partnership based on equality.

And now we come to one of the most memorable moments of the day….  Nono, one of the panelists, had asked Muzi ahead of time if she could make a surprise proposal to her girlfriend, Dumi, from the stage.  Muzi agreed. As time was speeding by and we had accomplished the work of two panel sessions during the longer morning panel, Muzi asked me to get up on stage and summarise the essence of the morning panel and then facilitate the marriage proposal.

The brave Nono came on to the stage and, in front of everyone there, declared her love for Dumi on bended knee and with a ring.  We all exhaled when Dumi said “Yes”. 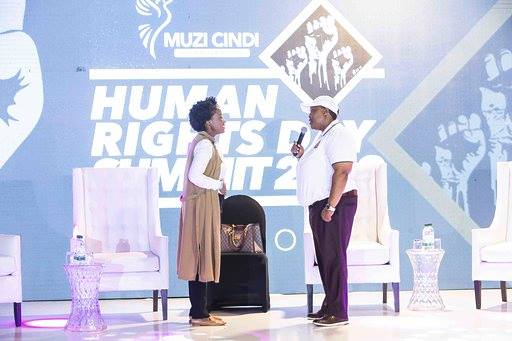 This proposal was revolutionary in terms of same sex marriage in S. Africa.  Regular heterosexual proposals usually happen in private but at least the couple can be openly in relationship without threat or judgement.

In the case of same-sex relationships, the individuals have, historically, had to hide their sexual orientation and hide their relationships too.  Same-sex marriage has only recently been legalised (the Civil Union Act came into force on 30 November 2006) and despite that, social criticism based on antiquated biblical “morals” remains strong so same sex couples have to be careful about publicising their engagement or marriage and they have to choose carefully whom they can celebrate with.  That is not freedom!

Well done Nono and Dumi for proudly agreeing to be together in front of an audience of at least 1500 people!  That took huge courage AND it symbolized the essence of the Human Rights Summit: i.e. the right to choose an intimate partner, regardless of gender, without fear of persecution. 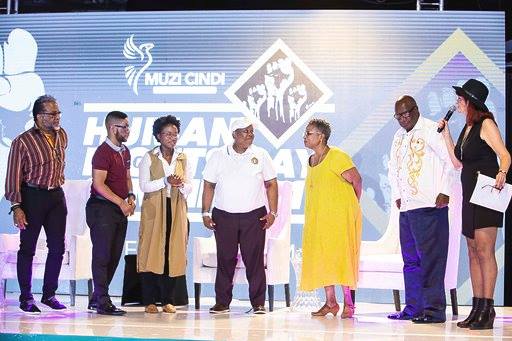 I called four of the bishops present up on to the stage to bless this Holy Union between Nono and Dumi.  What a surge of spiritual energy was unleashed, creating a springboard for their relationship to soar and thrive. 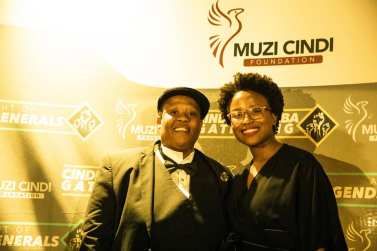 Next up was our keynote speaker, Bishop Yvette Flunder, who had joined us from the USA.  Such a beautiful lady of great depth, compassion and wisdom.  Bishop Yvette has been in a lesbian relationship with her beloved partner for over 30 years and is the voice of spiritual leadership in the USA, representing the LGBTQ+ community. She absolutely lives the love that she preaches.  What an honour and a privilege to have her in our midst! 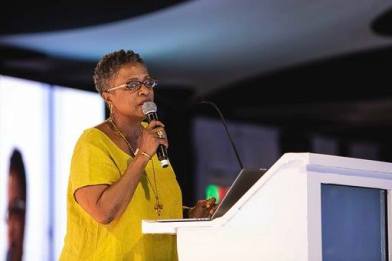 Before I finish this blog post, let me mention that another highlight of the day was the entertainment from Majeste Amore, the daughter of Rev. Gina Gauthier Pearson and Bishop Carlton Pearson from Tulsa, USA. Majeste is the most amazing singer with a depth and quality to her voice that is far more mature and developed than one could ever have expected from a 22 year old.  Every time she sang, I was moved to tears.  Soul Home member, Malefane Monyane, filmed her.

And now we come to the end of the Summit and the fulfillment of its holy purpose – the reconciliation with the LGBTQ+ community.  This section was led by Muzi’s friend and mentor, Bishop Jackson Khosa, a wise and humble man who has years of experience leading rituals for forgiveness and reconciliation amongst warring groups, particularly racial reconciliation and gender reconciliation.

When Bishop Jackson got up on stage, he immediately admitted that, in his past, he was one of the narrow-minded, prejudiced church leaders who rejected the LGBTQ+ community.  He asked all the pastors in the audience who were willing to admit to their own prejudice to join him on the stage in order to apologise and to ask for forgiveness from the LGBTQ+ community. 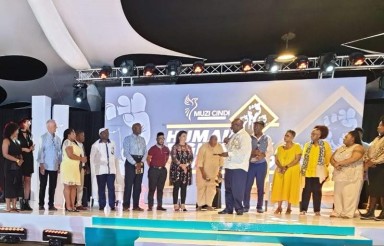 Bishop Jackson Khosa welcomes the pastors and ministers to the stage to lead the Reconciliation process.

Muzi had asked me to write a prayer for Reconciliation which he had had pre-printed on cards and distributed to everyone present.  I then stepped forward on to centre stage and read the prayer out, asking the audience to repeat it after me line by line.  (The prayer has been included in full below.)

Rev. Steph leading the audience in the prayer for Reconciliation

I sensed that even though many people present might have been uncomfortable with the unfamiliar wording and format of my affirmative prayer, nevertheless they joined in with willing hearts and minds.  Jesus said that it only takes two or three gathered in agreement for the Christ Consciousness to be present. In this case, on this Human Rights Day 2019, there were 1500 people affirming the truth of their divinity.  I KNOW we caused a cataclysmic shift throughout the universe and no-one at Birchwood was left unchanged!

A deep bow to you, Muzi Cindi, for being obedient to the call and creating this grand and glorious event. May all the blessings that you give return to you pressed down, shaken out and running over.

AN AFFIRMATIVE PRAYER FOR HEALING AND RECONCILIATION

RECOGNITION OF THE ONE POWER – GOD

There is One Power. We call It God, Life, Divine Mind, Holy Mother-Father or Universal Consciousness.  This Power is Omni-sexual – It embraces the polarities of Divine Feminine and Divine Masculine. It joyfully creates every variation on the spectrum of gender and sexuality with infinite combinations of chromosomes, cells and gender characteristics for Its own pleasure and delight. This All-Knowing Creator make no mistakes, no rejects, no aberrations nor any abnormalities.

MY CONSCIOUS UNIFICATION WITH THE ONE POWER

I AM that Holy Power, created in the image and likeness of Wholeness and Perfection.  As God/Goddess embodied in the flesh, I speak this Word of Truth for myself and the world.

MY DECLARATION OF TRUTH

I declare that I and everyone present here now, takes a quantum leap in their awareness of sexual identity as a perfect path to Spiritual Development and Awakening.

I know that the Spirit of Life within could not violate another and has, in Truth, never been violated. I forgive all others for their ignorance.  And I am forgiven for any thoughts words or actions born of fear.

The old wounds of seeming division between Spirituality and Sexuality, Binary and Non-Binary, Oppressor and Victim are now mended and healed forever!

I declare that the bonds of stigmatisation are now being loosed and released.  Acceptance, Tolerance, Inclusivity and Divine Justice are the new laws of my being and of humanity.

I claim perfect freedom and transcendence for all those whose pathway included HIV AIDS.  I know they are forever welcomed into the arms of love in their transition to the other side of the Veil.

The past, with all its secrets and lies, shame and hiding, is now dissolved.  I am set free to be the god/goddess I was born to be and to fulfill my divine purpose on earth as it is already in Heaven.

I stand on the leading edge of Evolution, deliberately co-creating a world that works for everyone.

I release this Word into the outworking of the Universal Law and know it is manifesting now! It is done!  And so it is! 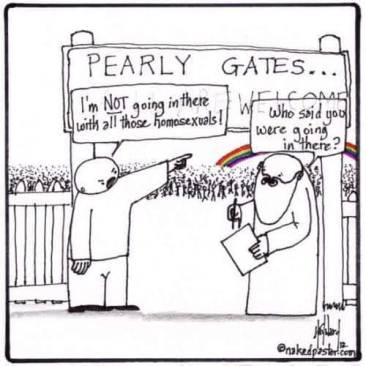 Author of “The Sex Goddess: Debunking the Mythology of God & Sex”